The Environmental Impact of 3D Printing

The study compares the environmental impact of traditional injection molding manufacturing with that of 3D printing.  Focusing on the presence of carbon emissions and the size of production, the results show that 3D printing has a lower environmental impact than traditional injection molding manufacturing under certain conditions.  The study was undertaken in 2013 by Cuboyo (www.cuboyo.com), a platform for 3D printable objects, with calculations made by Quantis, an agency specializing in environmental life cycle assessment based in Lausanne, Switzerland and Boston, Massachussetts.

3D printing technology allows consumers to produce a wide range of products independently. The technology has existed for decades but recently the cost of 3D printers has decreased significantly, making this technology available to the general public.

The trend in today’s individualized society is increasingly towards customization of products.  As Chris Anderson (The Economist,WIRED, author of The Long Tail, and CEO of 3DRobotics) has stated, “Rather than the personal computer, we have personal manufacturing.”  As 3D printing has begun to provide designers and consumers with more possibilities, it is has also started to compete with the existing industrial supply chain in terms of cost, speed, and ecological impact.

In addition to promoting more customization among consumers, 3D printing is shown to be more environmentally friendly than traditional manufacturing methods. Most low-cost 3D printers use a raw material called PLA (polylactic acid), a thermoplastic derived from renewable resources. It can save fossil fuel, according to NatureWorks LLC, and reduce waste rather than create it because it is biodegradable. 3D printing may reduce the utility of mass production, because in the latter approach, innovation is restrained by “economies of scale”- the more an item is produced, the cheaper it becomes.

The study compares the injection molding method with three types of 3D printers:

In this study, the following assumptions were made regarding mass production and mass customization:

·         Mass production is defined by: 1 variant of an object replicated 1 million times

·         Mass customization is defined by: 1 million of variants of an object are replicated only once

·         The frontier between mass customization and mass production is defined at 1,000 variants replicated 1,000 times

·          For injection molding and 3D printing, objects are made of Polypropylene (PP) and Polylactic acid (PLA), respectively.

·         The printing time is approximately 50 min, with electricity consumption derived from European UCTE consumption data (Union for the Coordination of Transmission of Electricity)

·         Ecoinvent 2.2 parameters have also been taken to conduct this study 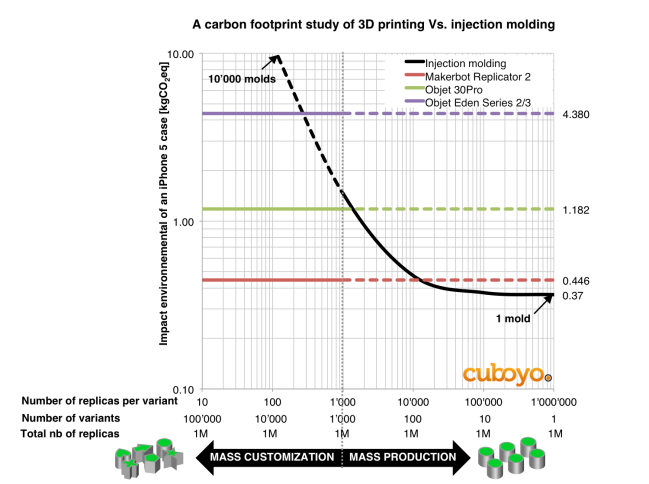 Figure 1: Environmental impact of a customized iPhone 5 case between a mass production tools (injection molding) and mass customization techniques (3D printing). The injection molding is impacted negatively by the number of variants, which directly increases the number of molds; the worst case being creating 1 Million of different molds to create 1 Million of different variants. Thanks to additive manufacturing which is a tool-free technique, 3D printing has a controlled environmental impact for highly customized objects. The closest result for a lower environmental impact would be the Makerbot Replicator 2 and other 3D printers.

The study shows that, on the one hand, classic manufacturing is not adapted for low volume production of different objects in terms of environmental impact. On the other hand, the 3D printing technique cannot compete with injection molding for high volume production. The environmental impact of 3D printing is also influenced by the electrical consumption of the type of 3D printer used. Higher quality 3D printers (Objet Eden Series2/3) tend to have a higher electrical consumption compared to low cost 3D printers (Makerbot Replicator 2).

The study shows that 3D printing has a reduced environmental impact compared to injection molding for low volume production (<300 replicas) independent of the quality of 3D printer used. Thus, the low cost 3D printer opens up a new window for highly customized/low volume fabrication of objects with a controlled environmental impact on CO2 emission.

3D printing is being promoted as the technology that will lead us into the next industrial revolution. Clothing, electronics, replacement body parts, biological components, and even entire functional organs will be able to be built in the near future. Consumers should be aware of and prepared to enter the third industrial revolution governed by mass customization and a lower environmental impact.

Cuboyo LLC was created in Switzerland in 2013 by three 3D Printing enthusiasts. They felt that there was not an accessible marketplace for buyers and sellers to exchange 3D printable files to fully realize the revolutionary possibilities of 3D printing.

Quantis is a leading life cycle assessment (LCA) consulting firm specialized in supporting organizations to measure, understand and manage the environmental impacts of their products, services and operations. Quantis is a global company with offices in the United States, Canada, Switzerland and France and employs close to 60 people, amongst which several are internationally renowned experts in the LCA field. The Canadian branch of Quantis is a spin-off of the CIRAIG from the École Polytechnique de Montréal, a research center specialized in environmental life cycle assessment.

For a video introduction and information in “How it works”: www.cuboyo.com/how

For general information on 3D printing:

For general information on this study: